I know it has been ages since I blogged. In these intervening months my life has been turned around on it's head and I am just getting my bearings back.
From living a life of solitude on a six and a half acre mango orchard to living amidst hundreds of people who make it their business to chat you up, from doing housework, cooking, gardening to letting others do them all for you, life has indeed changed. I will not say for the better or for worse because there is nothing to compare. Life has just changed. Though right now I have space constraints and cannot take up quilting on the same scale as before, I have already done a block for Esther Liu's BOM - the Queen's garden and also made myself a mobile sling bag.
Oh and having something finished came in handy. Invited to a house warming I found this pair of cushion covers a great gift. 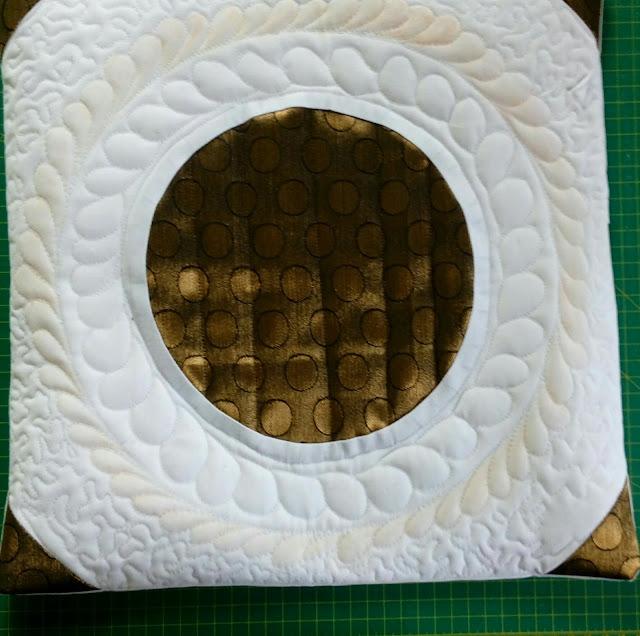 The mood is still pink I guess! I managed to sew up a thank you gift for my niece, do the strap for a bag meant for her sister and which has been languishing for about 6 months now. The Jasmine sling bag is by Bagstockpatterns and this is the third one I am sewing and I see a few more in my future. I incorporated the two options provided to get more pockets. 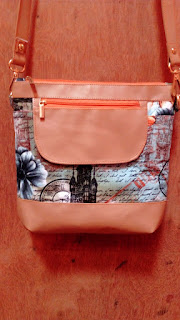 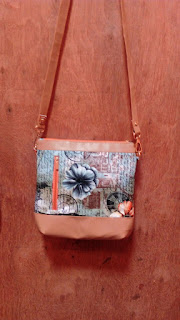 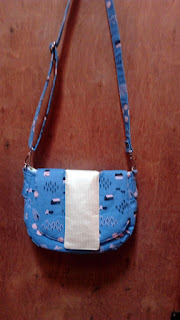 This was the Chloe saddle bag. I had some issues which put me off finishing it.Now with the strap added it is off to it's new owner. 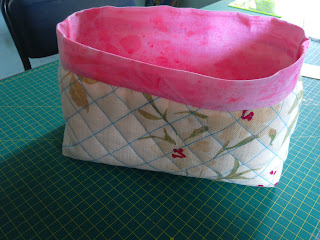 The fabric basket that troubled me no end is also finally done. Next time I am trying a different pattern as this one did not work for me.And finally one more pouch done yesterday and another all cut out and ready to sew this evening! Feeling good about my determination to keep it going. 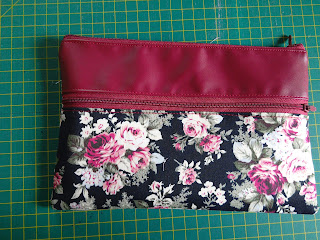 I have been going through one of those moods that see me sewing very little. Things happening on the home front is keeping me distracted. And if that was not enough my Juki is going cranky on me. It does that everytime I do fmq on a large quilt. About half way through it decides ‘I am tired of not going on the straight path’ and whines and howls until it gets on my nerves! With experience I know that sewing some regular stuff can get my machine back on its tracks although at times only a visit to the service centre can do the trick.
But I have my own weird fixations and one of them is that I hate going onto another project while I have one that needs finishing. (I do have a few UFO s but they are mostly abandoned although I have hopes of resurrecting them sometime in the future.) So I have been twiddling my thumbs and wandering in and out of my sewing room dragging out finishing a fabric basket.  Even putting away the quilt did not help. The quilt is my Splendid sampler and  I am almost at the finish line. 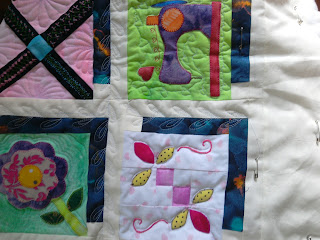 Yesterday I finally managed to get over my lethargy and sew up a couple of gift pouches. 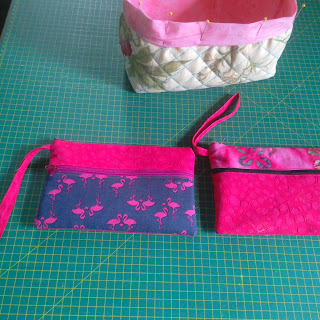 I got some lovely scraps from my tailor the other day ( although I would never dream of discarding anything so large. Well in truth I do not discard which is why my collection of fabrics is now occupying two rooms!) And as I had promised dh gifts for a couple of girls at our grocery shop and also had a pattern from sweetbeebuzzings  that I wanted to try out, I made these pouches. I loved the shocking pink scrap that my tailor gave and teamed it with some fabric from my stash to add to the looks.
I have to admit the pattern really turned out well. The pouches look lovely that I am tempted to make one for myself and maybe a few more as gifts. And the size is pretty decent. I skipped adding the fusible fleece or in my case batting and am happy I did so, as this is well structured with all the layers of fabric. My wrist strap ended up a touch high causing some unseemly bulge inside and next time I plan to place it a bit lower.
Now to cut out something else cashing in on the high of ticking off something off my list of to-do's. That list is long so expect a lot more goodies.

I wanted to set out the process I followed in doing my sunflower wall art. And especially the mistakes I made so someone else who does a similar one can avoid it. The photo that inspired it has been in my collection for about two years now. Who would have guessed that even in a climate like that of England one could grow large sunflowers. 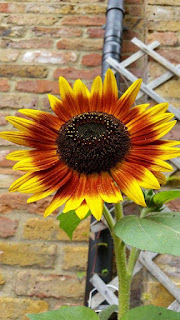 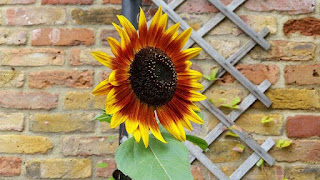 It seemed a pretty simple flower to do and yet I procrastinated using other projects as excuses. Finally I pushed myself to do it a month back. To keep the challenge to a minimum I cropped the picture, editing out the wall and most of the leaves. In hindsight I feel it took away something from my finished work. The flower now looks too big and oversized. So note to self. Next time keep more background! 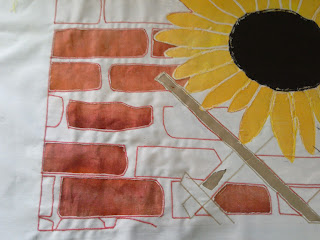 After tracing the printed picture on to a white background, (a mistake I realised later) I used reverse applique to sew. I started out with simple short straight stitches and switched to narrow satin stitch as I found that on trimming the foreground cloth there was a risk of the straight stitch coming off. 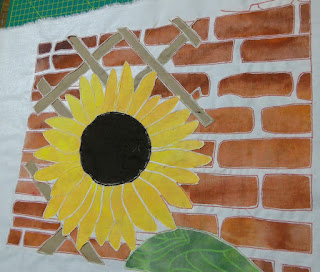 This was after I had trimmed the foreground cloth on all the pieces! There were a lot of loose threads that constantly kept coming out in spite of constant trimming. And the white showing through was also bothering me.So I used a matching colour pencil to shade the white and let it merge. The next step was to use machine embroidery to add the brown color. Looking back it seems that plain yellow looked better. Maybe I should redo this keeping it just yellow. 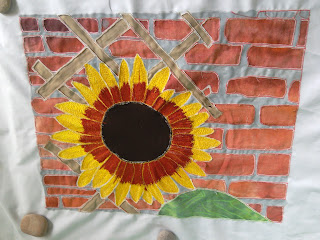 Since my yellow was a bit anemic I machine embroidered that too with some glowing yellow silk thread. That left the bits in between the bricks. To keep it realistic I had to color it gray. Machine embroidery or fmq seemed a bit daunting. Especially when I had stone gray paint. It was a touch dark but once I add some white it was just right. I would have been better off strating with that grey as foreground cloth.
Then all I needed to do was sandwich the piece and do some fmq on the bricks to give some texture and add some to the flower too. 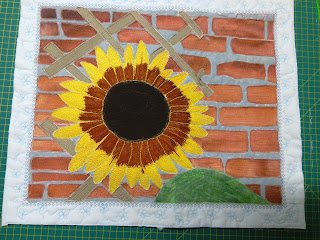 Since the gray was painted fmq on that was ruled out. After debating on whether the white frame was necessary or not I decided to trim it rather than keep it. Binding and beadwork for the centre and some sleeves to hang it and there it was finished!
Well not quite! I don't think I did justice to the photo and perhaps will revisit it. Fused raw edge and more background perhaps? Just plain yellow. Freezer paper applique. So many options to explore. 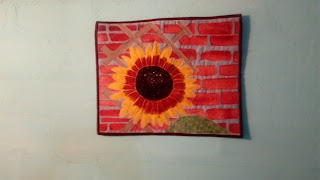 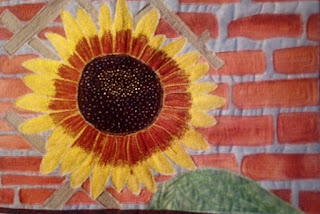 Last year I decided to make a list of the books I read. Two reasons for that decision. One is simple. I forget names very quickly. That has been a game since the last twenty years. Someone told me it is called selective aphasia. Knowing the name does not make it better. The other reason was that my reading had become non- existent. I had very little access to books but more so hardly any time to read. Quilting occupied all my waking moments. So I though a list of books would give me a impetus to read a bit more.
The list was started but I never got around to keeping it updated. But I did read a lot. Almost all Kindle of course.
My tablet is now in my hands most of the time. When I am not surfing I am reading. Let me see if I can this year get back to writing too. The list then is part of my writing exercise. I am reading the second volume of Marissa Meyer's Lunar Chronicles. It is Red Riding Hood time.
Now to figure out how to add the new standalone page!
Posted by shobs at 8:36 PM 6 comments:

The bag bug has bitten me and I have given in to it. I have a sister who loves bags and has to buy one every time she takes a trip. I carry something I bought almost thirty years ago. So I thought I was not a bag person until I came across patterns sewn up by quilters. And I find I have the bug too except I need to make bags not buy them. Here are three that I made recently. The first was a pattern by Bagstock - the Everyday Tote and I made a matching clutch with a swoon pattern. 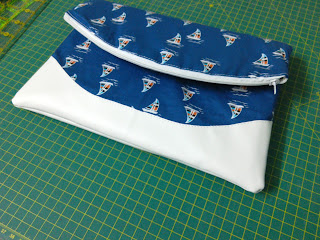 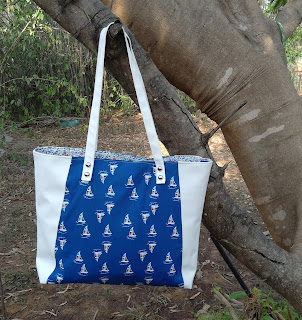 The second set of bags are from swatches given by a cousin to be made into bags. I like the way they turned out. 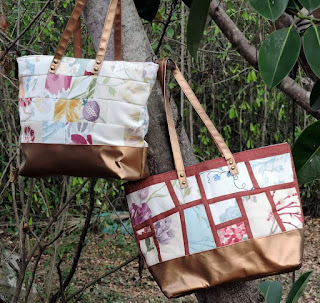 Linking them with the Elm street Quilts Bag it entry
Posted by shobs at 5:13 AM 6 comments:

Last month I never even attempted my OMG though it was meant for a certain special event. My machine came back from servicing a bit too late for me to sew anything. But I did prep a lot of work and this month have been working on them. Two are close to be finished - they will be the gifts for dh for his 60th birthday on saturday. I had intended to one more wall art for him - all birds as he is a avid birdwatcher but I think I may not get it done in the next few days.
Anyway finishing four wall arts that are in various stages is my November goal. First is to add a sleeve to this quilt that I just finished facing yesterday.