A friend of mine from the US of A by name Cindy Ellerbe remarked once, ‘You Indians jump in with both feet.’ She was commenting on the fact that many quilters in our group would embark on something complicated their first time out, something she felt quilters from her country never did. I have to plead guilty to that charge. I always seem to take on more than I ought to. The proof of that hangs before me – my peacock tapestry which took me three years to complete. And I have a crocheted runner that would add weight to the charge. And now here is my ‘starstruck’ quilt done over a period of one and half years. I must admit that now when I see it in full I wonder how I managed it.


Madhu Mathur, a fellow quilter has designed the blocks on a free software called Quilt Assistant. The blocks were all paper pieced and were released fortnightly. ( You can find the blocks here). I was doing a quilt practically every month and so my blocks were often relegated to the backburner! Until I decided the quilt was going to be finished before the curtains rang on 2015. And I just about managed to keep my promise. 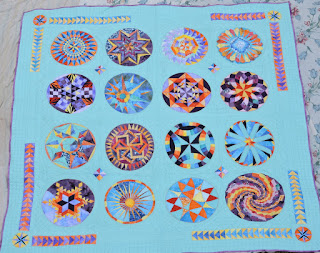 The layout for the blocks were also designed by Madhu. I chose this as it was easy to break into panels and do it qayg. 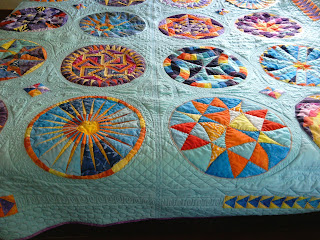 Details of the quilting. I wanted the blocks to shine and chose to quilt densely to make them stand out. 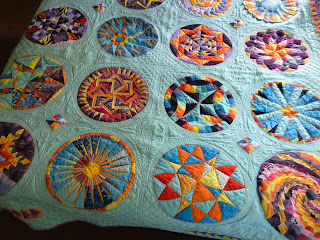 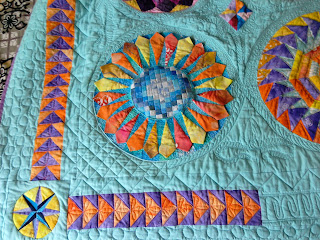 The spiked dresden framed by the border. I was thrilled to design the tiny compass in the corner something I would never have ventured if  Madhu had not encouraged me to do iṭ 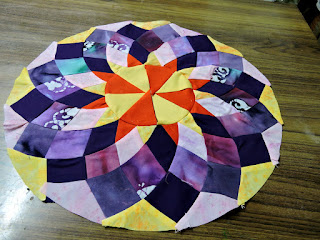 The first block and for me the most difficult. 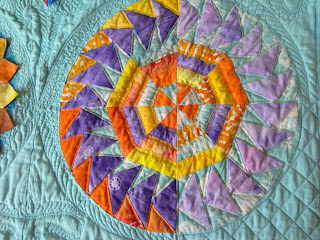 Geese at the pond. this was the second time I did it the first done as a tester and used in another quilt. 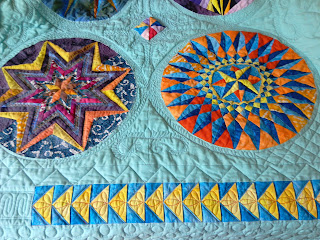 The mariners' compass on the right was easily the most pretty and I cant think the colours could be any more perfect. 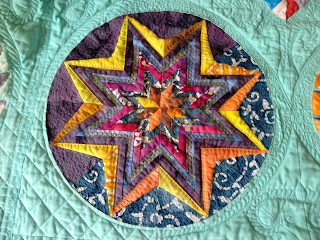 The blocks are quilted using decorative stitches rather than fmq. You can see that here. 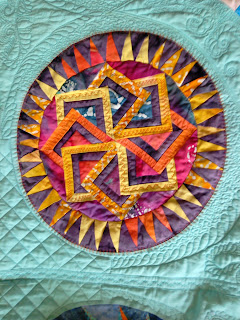 And in this Card trick block too. 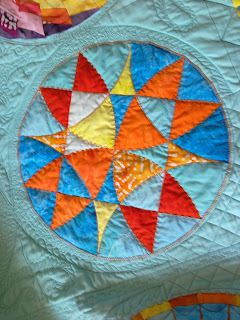 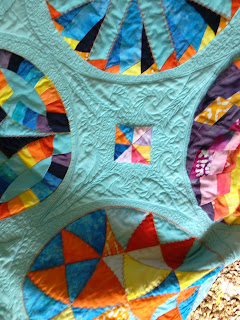 I did go overboard on the quilting I freely admiṭ 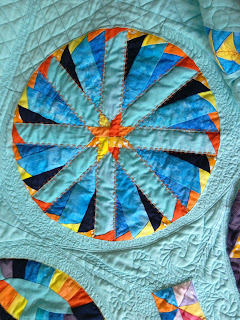 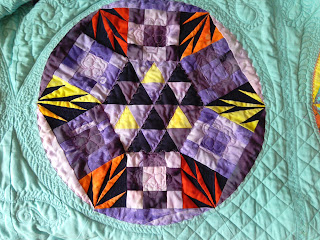 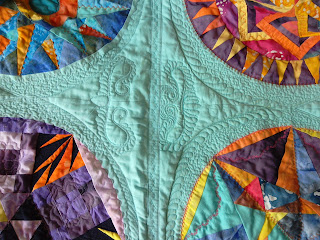 Quilting in between blocks.

This quilt was a journey as I learned to paint fabric to suit the blocks, paper piece and sew a little more precisely and even design a tiny block for the quilṭ. The journey would not have been possible without Madhu and I hope the other quilters who have put their blocks on hold will take it up and finisḥ It is really worth the effort. What do you think?
Linking this with ALYOF and Friday Spotlighṭ